"This is what we have defined as Near Future Design.

A performative dimension in which the observation of the state of the arts and technologies meets anthropological and ethnographical observation."
"

"If, as suggested by Baudrillard, we were to simulate as closely as possible a fake holdup, we just would not be able to do it, because the people and, in general, the “machine”, the process through which people constantly interpret the reality they have around them, would not be able to distinguish the signals of what is real and fake/simulated."

a transmedia story represents the integration of entertainment experiences across a range of different media platforms
Henry Jenkins, 2007

The language of new media

Project (step 3): what-if and world building
1. define your counterfactual logic (what-if statements), one or more
2. build your own micro-possible-world, and possible objects (both archaeological and speculative)
upload to google drive on Jan. 2nd. 2019.

Questions:
1. What are counterfactual artifacts?
(containing an 'if'- clause that is contrary to fact)
nonfunctional prototypes, storytelling props, fictional objects
2. What is Possible World Theory?

Create your own writing style and documentation formats.
You may also include thing-centered narratives.

Ekkomaten—exploring the echo as a design fiction concept


Once Upon a Future - IoX project

Imagine you are a future anthropologist, record soundscape of Taipei:
record the following 4 types of sound

Discuss and pick up 2 types of thought experiments, and composite of the sounds into to two "fictional soundscapes." : Deadline Dec. 12, 2018

What is Future Archeology?
Whet is speculative archaeology?

Towards a speculative archaeology

(1)"I focused on DeLanda and his version of Deleuze but I briefly brought up speculative realism and why this “movement” rejects “the linguistic turn”."
(2) "Preucel and Meskell (2006:14) suggest that the fuzzy concept of materiality “takes as its remit the exploration of the situated experiences of material life, the constitution of the object world and concomitantly its shaping of human experience”."
(3)"Most speculative realists therefore attempt to break with correlationism (not Meillassoux himself though since he wishes to radicalize correlationism from within). I am all in favour of diminishing the centrality of the human being in archaeology."

The way of the Shavel


Questions:
1. What is the documentation film you want to present? What is you Archeology Plan and activity?
2. How to present speculative aesthetics of archaeology?
3.  how about speculative betrayal? Question:
What evidence (in what style) do you want to present?

Dunne and Raby, Designs for an Overpopulated Planet


Critical Design :: Restoring a sense of wonder to Interaction Design from Michael Smyth 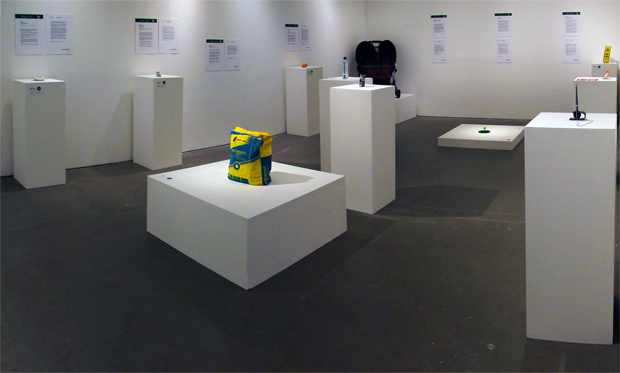 Auction of the future

From Design Fiction to Experiential Futures Rethinking How to fictionalize ethnography:
1. What are the basis steps or elements of ethnography?  design ethnography?
ref:(http://www.nicolasnova.net/pasta-and-vinegar/2015/9/28/design-fiction-anticipatory-ethnography-and-ethnographies-of-the-possible)
2. chose one or more steps/elements in ethnography, and try to fictionalize.
3. What is the possible outcome of such ethnography?
4. How does these outcomes provide speculation?

Paper reading:
The poetics of design fictions
(the narrative diagram) Research through design fiction: narrative in real and imaginary abstracts

Questions:
1. What is the possible narrative scheme? Illustrate it with diagram (分組討論)
2. What are the anchors? objects, human, place, legend, or ritual?

Practice: a letter from future
Compose a letter from future where the anchor event has just happened.
This letter should sensitize the relationship between future and the present, inspire how to conduct a design research, and fictionize your roles and worlds.

1. Choose a science (or design) fact (artifacts).
2. Use the artifacts as material of Poems.
3. You can change the color, painting, material, ...... to composite a setting.
4. You may add poem or Heiku to your work. (or poems by the artifacts)
5. Take lots of photographs and upload to the Google drive.


Questions:
What is "speculation"? What is speculative design? What is aesthetics of speculation?

Lars Tunbjörk’s Alien at the Office (2004)   (mundane spaces that seem extraordinary. Yet these alien spaces are where many people spend their working lives)


(The above three examples reveal spaces that we know must exist but have no idea how they look. They have a harsh, inhuman quality, stripped down to the absolute essentials, emphasizing their purpose.


Lucinda Devlin’s The Omega Suites (1991–1998)  provides glimpses into extreme
but ghoulish spaces—execution chambers, the places where the state, on its
citizens’ behalf, takes people’s lives. They are clinical, easy-to-maintain,
brutally engineered environments designed to achieve one purpose—the
humane killing of human beings. They include safety measures, provision for
last-minute retrieval, and the need for the event to be witnessed.

Larry Sultan's Untitled Evidence:
http://larrysultan.com/gallery/evidence/ : gathered images from the archives of research centers,
laboratories, test sites, and industrial facilities, presented without captions
or other information. They compel us to interpret what is going on, to project
stories and meanings onto them, illustrating that even objective records are
rarely neutral.

For us, these are the proto-images for an aesthetics of speculation. They
suggest a techno-poetic landscape situated somewhere between what we are

and what we have the potential to become.

The essential move here is to identify aesthetics with “enjoyment” (Levinas’s term) or “allure” (Harman’s) so that the sensual qualities of objects in which other objects “bathe” is understood as an essentially aesthetic response. Thus aesthetics is generalised so that it applies not only to humans but to all objects, including inanimate ones.


Following Harman, Bogost accepts that “all objects recede interminably (沒完沒了的) into themselves,” which implies that putting things “at the center of a new metaphysics also requires us to admit that they do not exist just for us.”

"we never understand the alien experience, we only ever reach for it metaphorically.”


"Where I begin to depart from Bogost and Harman is on the issue of how objects manifest themselves. Whereas they emphasise an object’s allure, the attraction it emanates for other objects, more important in my experience is the resistance objects offer to human manipulation and understanding"


"I ended by arguing that the way to escape anthropocentrism is precisely through an imaginative projection into the worldviews of other objects and beings, based on evidence about their ways of being in the world,"

"One way this might be possible is to treat design speculations not as
narratives or coherent “worlds” but as thought experiments—constructions,
crafted from ideas expressed through design—that help us think about
difficult issues." p. 80. SE

"Thought experiments are usually done in fields
where it is possible to precisely define limits and rules, such as mathematics,
science (particularly physics), and philosophy (especially ethics) to test
ideas, refute theories, challenge limits, or explore possible implications.
They make full use of the imagination and are often beautiful designs in
themselves."

"One of our favorite forms of thought experiment uses reductio ad absurdum,
a type of logical argument in which one assumes a claim for the sake of
argument and derives an absurd or ridiculous outcome by taking it to its
extreme, concluding that the original claim must have been wrong because it
led to such an absurd result."

"Another well-established form of thought experiment is the counterfactual. A
historical fact is changed to see what might have happened, if. . . . It is
sometimes used in history to understand the importance of key events and
their influence on how the world turned out."


"...we are
more interested in using props to transport viewers’ imagination into a
thought experiment, or what-if, and allow enough room for them to make
their own interpretations." p. 93, SE


Generally speaking, there are seven types of thought experiments in which one reasons from causes to effects, or effects to causes. (wikipedia)

Prefactual (before the fact) thought experiments — — speculate on possible future outcomes, given the present, and ask "What will be the outcome if event E occurs?"
(2)

Counterfactual (contrary to established fact) thought experiments —  — speculate on the possible outcomes of a different past; and ask "What might have happened if A had happened instead of B?"

Semifactual thought experiments — — speculate on the extent to which things might have remained the same, despite there being a different past; and asks the question Even though X happened instead of E, would Y have still occurred?

The activity of prediction attempts to project the circumstances of the present into the future.

The activity of hindcasting involves running a forecast model after an event has happened in order to test whether the model's simulation is valid.

The activity of retrodiction (or postdiction) involves moving backwards in time, step-by-step, in as many stages as are considered necessary, from the present into the speculated past to establish the ultimate cause of a specific event (e.g., reverse engineeringand forensics).

he activity of backcasting —involves establishing the description of a very definite and very specific future situation. It then involves an imaginary moving backwards in time, step-by-step, in as many stages as are considered necessary, from the future to the present to reveal the mechanism through which that particular specified future could be attained from the present.

1. student presentation
2. what is "narrative" in science ficiton?
3. What is "counterfactual narratives" ? 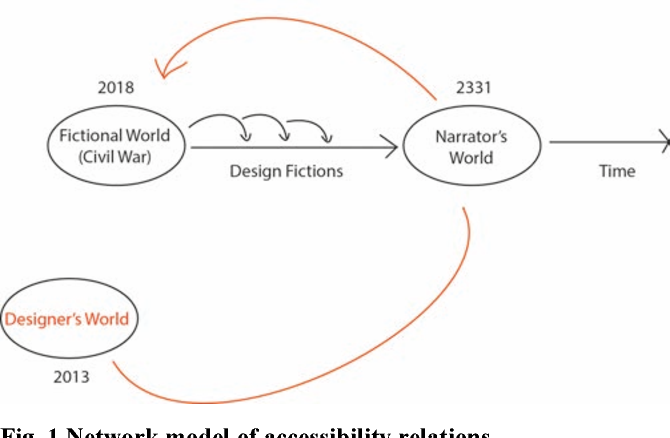 1. The universe of possible worlds is constantly expanding and diversifying
thanks to the incessant world-constructing activity of human minds and
hands. Literary fiction is probably the most active experimental

2.
As Lubomír Doležel writes in Heterocosmica: Fiction and Possible Worlds,


“Our actual world is surrounded by an infinity of other possible worlds.” p. 70, SE

4.
Although rarely discussed in design beyond the construction of
brand worlds and corporate future technology videos, there is a rich
body of theoretical work in other fields dealing with the idea of fictional
worlds. Probably the most abstract discussion is in philosophy where
differences between the many shades of real, fictional, possible, actual,
unreal, and imaginary are teased out. In social and political science the
focus is on modeling reality; in literary theory it is on the semantics of
the real and nonreal; in fine art, make-believe theory and fiction; in
game design, literal world creation; and even in science there are many
rich strands of discourse around fictionalism, useful fictions, model
organisms, and multiverses. For us, the key distinction is between
actual and fictional. Actual is part of the world we occupy whereas
fictional is not. p. 70, SE

Speculating is based on imagination, the ability to literally (如實地) imagine


other worlds and alternatives.

Possible worlds is a philosophical concept developed in the
latter twentieth century by the analytical school, including
philosophers Saul Kripke and David Lewis [34, 48] and
was later adopted by literary theorists [cf. 38, 22, 45].
Philosophically, possible worlds is an approach to the
problem of counterfactual statements in modal logic. For
example, Kripke asks what is the truth condition of the
statement that Sherlock Holmes “does not exist, but in other
states of affairs he would have existed” [31]; or this
counterfactual statement by Ryan [48], “if a couple hundred
more Florida voters had voted for Gore in 2000, the Iraq
war would not have happened.” In modal logic, the
question is how is each of these counterfactual statements
interpreted to be true or false. The philosopher David Lewis
who bridged analytical philosophy to literary theory [32]
offered the position that propositions like counterfactual
statements can be seen to be either true or false dependent
on in which worlds the statement is true and which worlds

7.
A counterfactual is a virtual or
tangible artifact or system in design and HCI rather than
statement or text. Hence we refer to it as a counterfactual
artifact. The notion of an actual counterfactual is a
departure from Lewis’ criterion that possible worlds have
no spatial or temporal connections to the actual world—
they are remote. Yet, here we view this departure more
advantageously than negatively. p. 101, MS

8. There is a productive and creative space at the boundary